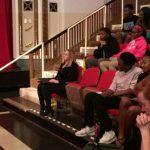 A group of teens are planning to take a more active approach to defeat violence among African-American youths in Nashville.

“It’s a call to action panel to see, one, what they think about what’s going on, and two, what is it that we need to do to fix the problem?” said Aniya Milford, a Hume-Fogg senior and president of Black Americans United. “It’s basically to get everything put on the table so that everybody has a clear understanding of what is expected of them.”