To all Juvenile Court litigants:

Please be advised of the following changes to the Juvenile Court process:

We have made these changes in order to provide the community with the safest court environment possible. Thank you for your understanding and cooperation.

Nashville-Davidson County’s Juvenile Court Judge Sheila Calloway, the Juvenile Court Magistrates, and the employees of Juvenile Court welcome you. Together we are responsible for making sure that every child and parent who passes through our court is met with justice, fairness, and hope. As described by Tennessee Code Annotated Section 37-1-101, the purpose of juvenile court is: “To provide for the care, protection, and wholesome moral, mental and physical development of the children coming within its provisions.” Using evidence based programs and services, Nashville’s Juvenile Court and the youth and families it serves are LEADING THE WAY. 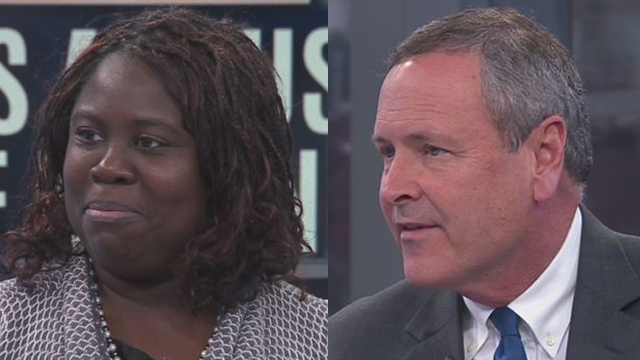 Because of their professional ties to this particular case, both judicial figures could only comment in the abstract.
Full Story…

NASHVILLE, Tenn. (WTVF) — The latest deadly shooting in Nashville involving five minors has caused people in the community to raise questions about the juvenile justice system and restorative justice measures.

Metro Nashville Police said the two stolen guns recovered were reported stolen. The pistols were taken from two unlocked vehicles. One vehicle was stolen Wednesday, January 6th 2019, the other pistol was stolen last year. It’s unclear how the juveniles got both guns in their possession. 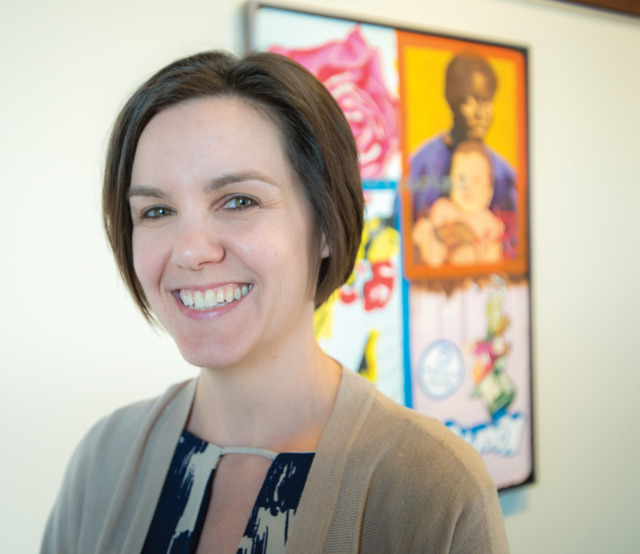 A storyteller attends weekly hip-hop dance lessons with a group of seniors at a community center. An actor leads probation officers and kids involved in Juvenile Court in performative storytelling. A painter-historian plays a board game with his neighbors in a North Nashville coffee shop.

All of these artists are involved in Metro Arts: Nashville Office of Arts and Culture’s groundbreaking programming, which has been implemented over the past three years. The goal? To encourage equity and creativity through the arts in communities throughout Nashville. 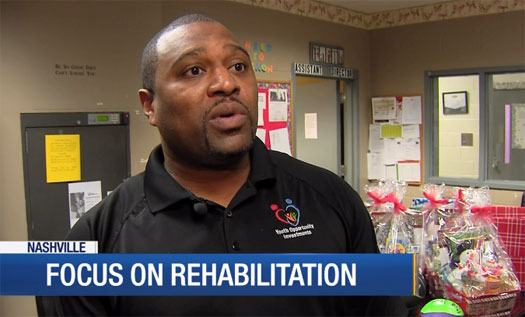 For children behind bars the holidays can be an extremely hard time, but the Davidson County Juvenile Detention Center says just because they’re locked up doesn’t mean they can’t celebrate.

“Our youngest child that we have here is 13,” vice president of programs for Youth Opportunity Dallas Scott said. “We have some kids with assault, some battery, all the way up to murder in the first degree.”

Although the ages and charges vary inside the detention center the end goal is the same.

“We’re not in the business of punishing kids but we definitely want to provide treatment on a daily basis,” Scott said. 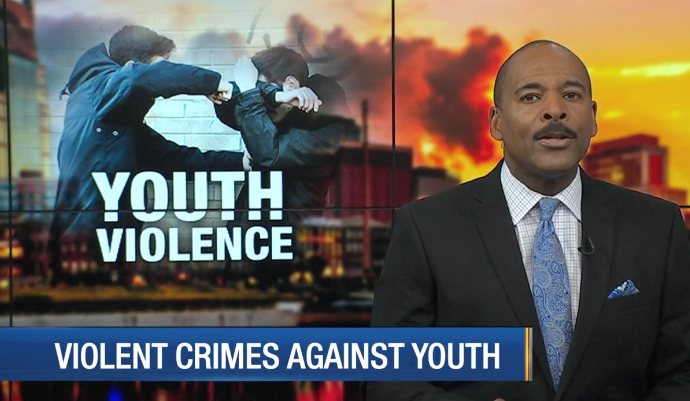 That’s the number of kids under 17 shot in Nashville so far this year.

“It’s just something that will be with me forever,” Talia Monjet Simmons said. Her 17-year-old son was shot and killed six years ago at a sweet 16 birthday party. “I never thought at 17 I would have to bury my son.”

Teens falling victim to gun violence has been a consistent narrative in Nashville’s recent history. So consistent in fact that the number of kids under 17 shot year-to-date in 2017 is the same as this year: 42.

“I look forward to the day we can celebrate absolutely zero victim of juvenile crime,” Judge Sheila Calloway said. “We also have to work together as a community to make access to guns much harder for our youth.”

Metro police’s Juvenile Crime Task Force alone has picked up 163 guns off the streets since February. 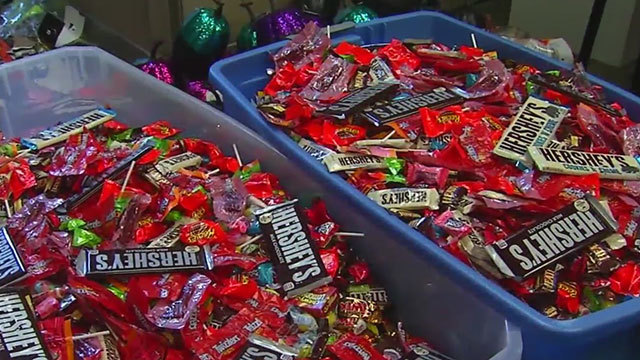 This is for our Spooktacular that we have been doing for the past several years. Our theme this year is Superheroes vs villains and I’m painting one of our superheroes, said Magistrate Judge Melinda Rigsby.

I am not painting. I am admiring the fantastic work of those who can paint. This is one of the most enjoyable things we do here at juvenile court, said Magistrate Judge Carlton Lewis.

Judge Shelia Calloway started the Spooktacular event when she joined the court in 2014.

Judge’s favorite holiday was Halloween. She loved to decorate, she loved to have fun. It was her way to connect with the Community and create a different image of what the Court provides for the Community,” said Demtris Chaney with community outreach.
The paintings are the outcome of lessons learned. Lessons about race, black and white; about violence and money. It’s the real world from the perspective of a Nashville teen fighting to drop their flag or walk away from gang life. 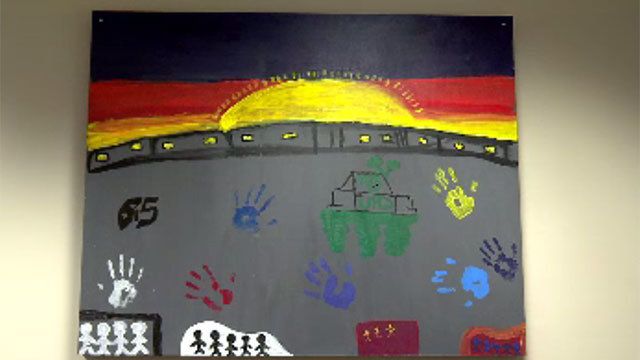 NASHVILLE, Tenn. (WKRN) – The words of gang members are showcased in a work of art in a courtroom in the juvenile justice center in downtown Nashville.

It’s the creation made by teenagers about how they view their life in their neighborhoods.

“Their surrounding home life, school life, street life is what we fight against every single day,” said Kelly Gray, a probation and gang unit supervisor in Davidson County.

The paintings are the outcome of lessons learned. Lessons about race, black and white; about violence and money. It’s the real world from the perspective of a Nashville teen fighting to drop their flag or walk away from gang life. 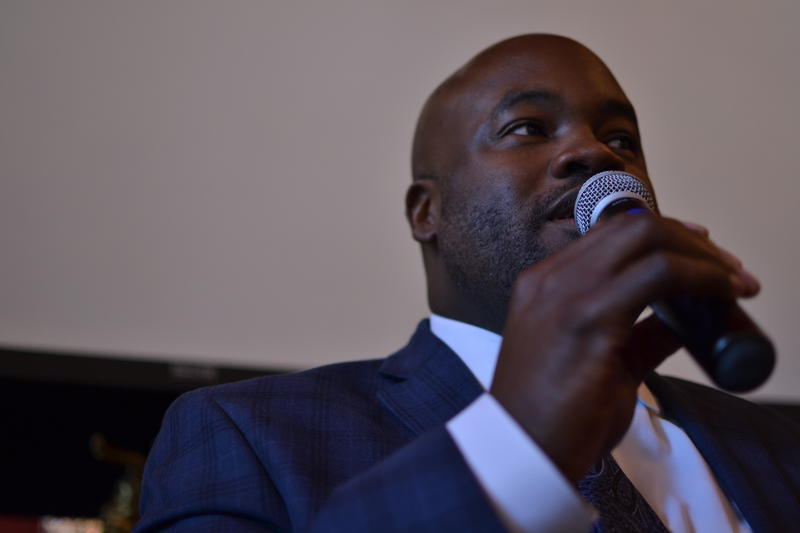 A new pilot program to help at-risk youth stay out of trouble is coming to Nashville. The initiative, named Restorative Justice, is the first of its kind in Tennessee.

Over 12,000 crimes were committed by youth under the age of 18 in Middle Tennessee last year. And, half of them happened in Davidson County, according to state data.

But, Nashville’s new restorative justice program could prevent these youth from committing a crime again, says Judge Sheila Calloway. The goal is to have juvenile offenders make amends with their victims and the community.

“What this program does, it is the first in Tennessee and it is an actual diversion from the criminal justice system,” says Calloway. 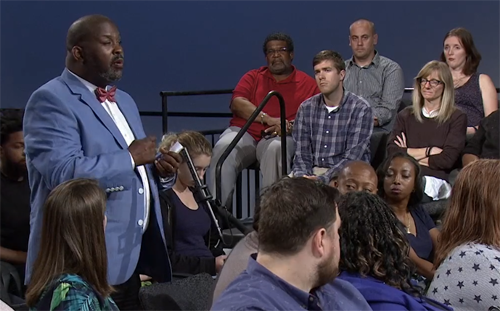 The Juvenile Justice Center lobby was packed with family, friends, guests and other elected officials supporting both honorees. Judge Sheila D.J. Calloway handled their swearing in and pledge to serve their positions to the fullest capacity. Distinctive remarks and words of wisdom and genuine support were shared by well wishing colleagues and others who could fit into the time frame given for the event.

It only took the tear-jerking story of a 16-year-old former gang member to put Vanderbilt linebacker Charles Wright into action.

“A boy told me that in his whole life no man had ever invested anything in him for school,” said Wright, who spent his early childhood in foster care.

Wade appeared on News 2 at 11. Her team is working with the public schools and police to figure out a way to eliminate some of the arrests, suspensions, and expulsions of elementary school children. They hope to better equip teachers to handle non-violent disruptions so that young children don’t end up in court.

NASHVILLE, Tenn. (WZTV) — A first-of-its-kind program in Tennessee is offering at-risk youth that are in the court system a chance to leave the gang life.

Efforts from law enforcement across the state continue to target young people prone to entering the gang life. These efforts come as an alleged gang member pleads guilty to second-degree murder for the 2015 killing of 13-year-old C’Asia Patton.

The Gang Resistance Intervention Program — also known as GRIP Court — pairs young offenders with probation officers and mentors that become guiding forces in their lives. By providing some consistency in the teens’ lives, GRIP Court aims to create a culture of trust between teen and justice system, something that is missing in the lives of young men skeptical of authority.

NASHVILLE, Tenn. – Nashville community leaders have created a coalition to combat the increasing problem of youth violence in Nashville.

Thursday evening, dozens of people gathered to discuss what can be done to stop the violence among Nashville’s youth.

Report: Children brought to court by parents more likely to come back as older juveniles

Vanderbilt student Brett Richey analyzed the data for her senior thesis. She looked at data from 2003 and found more than one out of four children who are brought to court through no fault of their own will later come back as juveniles facing charges.

“I was shocked by what I found,” said Richey. “It was something that was talked about a lot in the court. People who work with these children every day know that is true but it had never been really studied empirically before.”

NASHVILLE, Tenn. (WKRN) – The ages of two children recently arrested and charged have people around the country surprised and asking questions.

In less than two months, two 12-year-olds have been charged with felonies in two separate, violent incidents.

Monday night, a 12-year-old was arrested and charged with a number of felonies after Metro police said he tried to carjack a woman outside of a Midtown dance studio. Another juvenile is still on the run.

On New Year’s Eve, a 12-year-old was charged with criminal homicide after she allegedly accidentally shot and killed her 16-year-old friend with a stolen gun.

These children are hardly alone in their arrests.

A felony in Tennessee can range from theft over $1,000 to murder. After they’re charged, the children often end up in custody in the juvenile detention center.

“It’s very difficult for us to house children age 12 and under,” Judge Sheila Calloway told News 2. “If you’re combining them with older youth who have done some serious offenses, it can be counterproductive for having a child come to a detention facility.”

Juvenile justice plan would shrink number of youths in detention

Gov. Bill Haslam’s plan to reform juvenile justice would shrink the number of young offenders in detention centers and would lead to shorter sentences for some lower-level offenses.Haslam’s office filed legislation Wednesday that outlined the contours of the strategy he hinted at during his State of the State address on Monday. It is paired with $4.5 million in Haslam’s budget for resources in rural pockets of the state.Administration officials say the changes proposed in the Juvenile Justice Reform Act of 2018 would keep more kids out of the system and would reduce the likelihood that they would commit crimes as adults.

Full Story from The Tennesseean…

Teachers Need Another Kind of Training 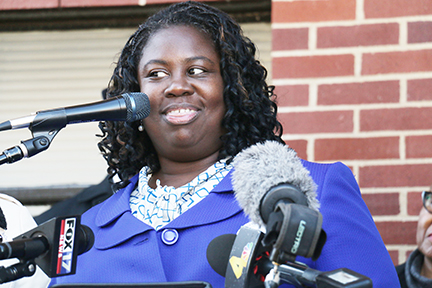 NASHVLLE, TN — Sixteen Metro School students have died in the last twelve months. While none of them died on school grounds, hundreds have been suspended from school.

That means those kids miss more school. When they return, they are behind and tend to disengage from learning in the classroom. And then they act out.

“Once their behavior starts showing that’s when the suspensions start all over again and you end up in a vicious cycle that lands that child in the prison system,” Calloway said.

Full Story from The Tennessee Tribune…

The following are types of cases Juvenile Court hears that fall within the municipal boundary of Davidson County.